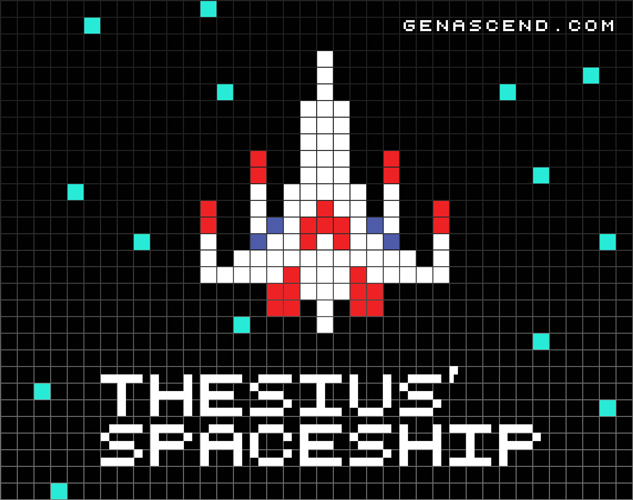 Theseus is captain of his spaceship and he and his crew take on the adventure of crossing the galaxy. After a few lightyears parts of the hull need to be replaced due to the extreme temperatures in space. Then the computer chips become corrupted because of space radiation so those have to be replace as well. The repairs go on and on until at some point all the parts of the ship have been replaced. Would you consider this to be the same ship? If not, at what point is the ship considered a different ship? At 50% replacement? 100%? What if we’d make a second ship only out of the old parts of the original ship. Would this second ship actually be the original ship?

The spaceship is equipped with a regeneration capsule which can regererate bodyparts. This way the crew can stay alive for hunders of years. In that scenario they become like the ship. After years they would be a completely new set of bodyparts. Would they still be themselves?

Imagine what it would be like to be a copied version of youself. You would have all the memories of the orignial you but you would know those memories are not real. You wasn’t there when those memories were created. Sometimes it can be helpful to distance yourself from memories that hold you back by imagining you are that copy right now.

I don’t know but, maybe this feeling of identity we experience is just a neat tool that helped us evolve into what we are right now. Being able to turn it off sometimes might be nice skill to have though.

Submit article, make a request or give feedback
Powered by: